One generation earlier in electronics

Although we might think that technology developments go fast these days, with the emergence over the last 30 years of personal computers, mobile phones and the internet, we easily forget that developments were at least as spectacular one generation before. During his life my father Petrus Johannes (Piet) Hooijmans witnessed the emergence of radio broadcasting, and then became a telepgraph operator in the intercontinental radio telegraphy. The post-war years of expansion finally gave him the opportunity to become an engineer, working for twenty years on a number of state-of-the-art electronic subjects, often with/under some high-profile experts. To name a few: Although none of the subjects Piet worked on is unique or breaking boundaries, they were all on the edge of new technology and applications, and it is remarkable to see how every few years he became involved in yet another new sub-domain of electronics. All in all a career he could be proud of. I’ll therefore use his career as a trigger to decribe some remarkable, interesting, and often forgotten engineering developments between roughly 1945 and 1970. 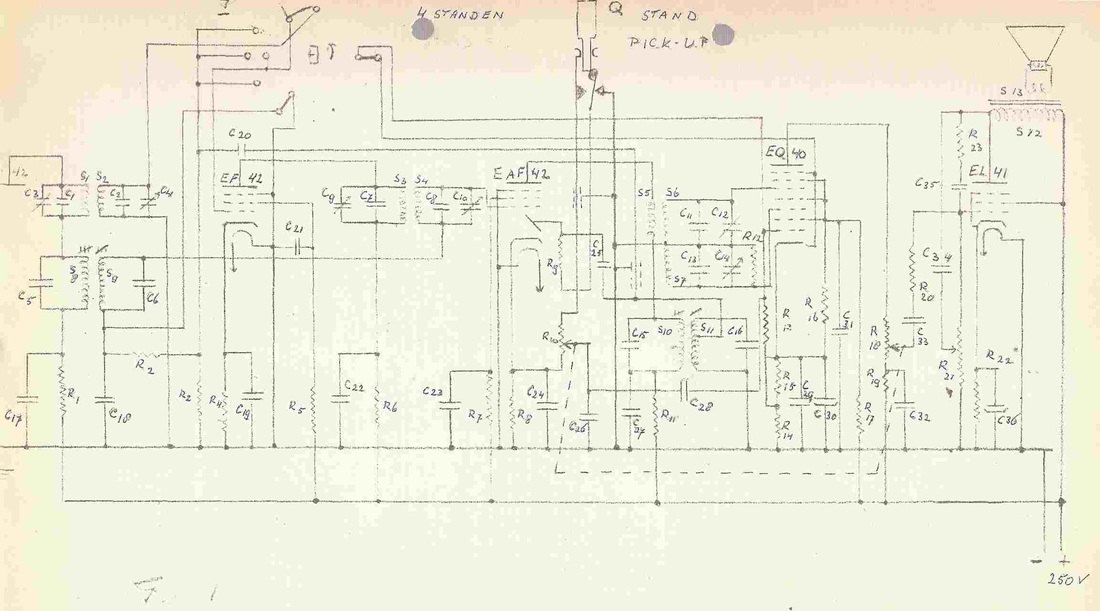 Picture of the total IF and LF sections including the EQ40 as FM detector for the combined FM/AM receiver.
These are the conclusions on these topics in the report:
These measurements were based on tubes with so-called constant winding speed (“spoed” in Dutch) of the control grids g3 and g5. Therefore the tubes have been changed based on variable winding speed control grids. This gives a lower slope of the characteristic, with a less annoying influence on the AM detection. This is explained in the release report of the EQ40 by Radio Lab 1.

The experiences gained with this FM/AM receiver with an FM band and an AM band, have demonstrated that the use of one single mixer tube for FM and AM leads to switching difficulties (complex switches, mutual influences on bands). The Americans have solved this in general by using two separate RF channels. We have now proposed a solution which offers, while keeping the number of tubes used unchanged, a much better repartitioning of the functions such that the FM/AM reception performance can be improved. Experiments in this direction will continue.

In September 1949 he left Philips. The main reason was not the job, in fact he enjoyed himself quite a bit in the Radiobuizen Lab, but after having lived for all his life in Den Haag and Amsterdam he could not get used to the still very small and rural (read "boring") Eindhoven. He applied again for a position as electronic engineer at the PTT Central Laboratory in Den Haag, and this time he was accepted. Initially this was on the Kortenaerkade, opposite the Royal Stables of the Noordeinde Palace, but in 1955 the lab had grown so big that it needed a new building, which was constructed in Leidschendam, just north of Den Haag. From then on it was called Dr. Neher Laboratorium (DNL) and Piet would stay there the rest of his working life. He moved to Voorburg and, after he married Josephine Tromp in 1957, this is where their three children were born. In 1965 the family moved to Leidschendam where they would live the next 40 years. 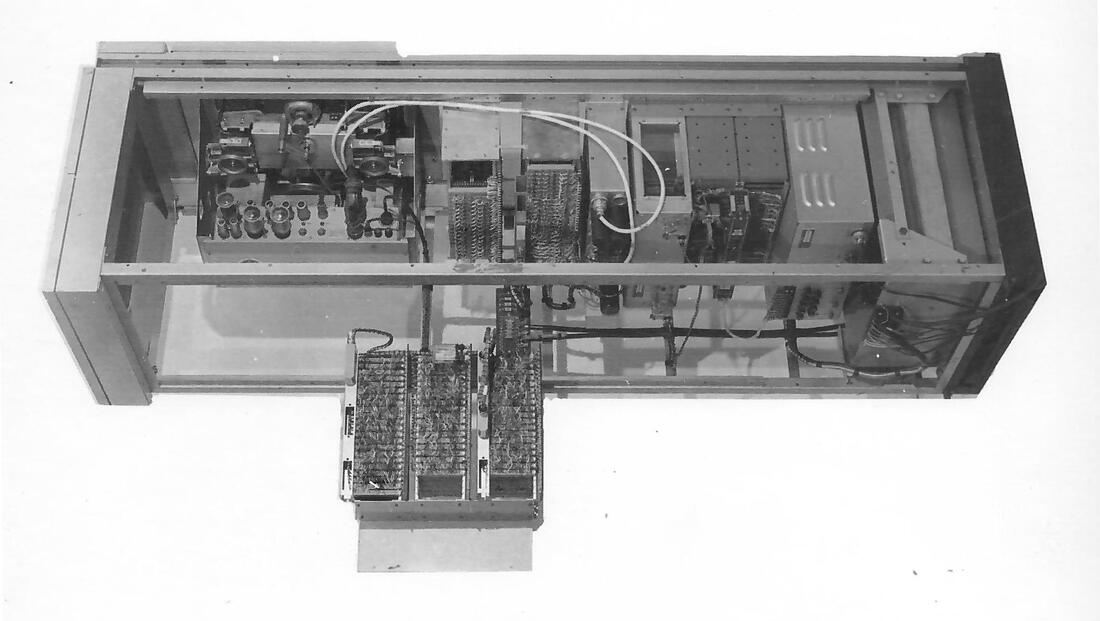 Bottom view of the opened ZEBRA-Ampex recorder interface. Left the recorder, probably still with a few valves. In the centre two blocks containing the digital circuit boards developed by Piet. One unit with three blocks of some 25 PCBs each was able to swing out, as shown, for ease-of-service. [PTT DNL Report Nr. 68 MA, 1964]

In parallel, because most reports are issued within one year, Piet worked on three other topics, all related to data processing by the rapidly growing PTT organisation. The first project was an experimental set-up for fast reading of machine writing. This was a technology much pursued at this time, both in the US and Europe, driven by the need to handle the rapidly increasing amount of administrative data generated by the emerging computers and digital systems. For the Dutch PTT this was especially the reading of the punched cards that were used by the Postcheque en Girodienst (PCGD) and Rijks Postspaarbank (RPS), that were both under or linked to the PTT because they used the post office services. (After a number of re-namings and mergers, both ended up in today's ING Bank). For this the Mathematische Afdeling built a test set-up, to evaluate the efficiency to detect printed text.

The last technology Piet worked on while in the Mathematische Afdeling was another new development: automatic error detection in decimal numbers, or, what we call today, parity checking. This was a typical project for the MA, because it was a technology that required a solid theoretical basis before any implementation. The parity system Piet describes in his report adds one parity number to a 7-number giro account number, such that the sum of the eight numbers is equal to zero modulo 10. Interestingly, and probably even at that time unknown to any reader, Piet used his own giro number (he was a very early and loyal PCGD customer) 660852 as example. (Because the sum of the numbers is 27 it requires a 3 to make it 30 or 0 module-10: 6608523. With the method applied the system should be able to detect This combination of requirements could only be achieved with an odd numbering system, and thus not using the standard decimal system. A first step was thus that the decimal numbers were converted to the so-called biquinary system: any decimal number A was translated to a 2-digit number b-a, with a from 0 to 5, and b=0 for A between 1 and 5 and b=1 for A from 6 to 0. (Note that 0 is coded as decimal 10). The parity check now became a modulo-2 check on b and a modulo-5 check on a. The equipment Piet developed was the verifiier of the parity, not the generator of the parity number. The equipment was intended to be used e.g. PCGD or RPS offices for fast verification of giro account numbers including their parity number that were used by clients. Since the basic giro account number used 7 numbers, the giro number with parity was 8 numbers.

In 1968 he moved into general management, becoming the head of all services (“Algemene Zaken”) within the Dr Neher Laboratory under his former boss van Duuren, who was already some time the head of the DNL. AZ effectively had all non-technical services within the DNL: the personnel department, publicity, the still sizeable work shops, the library, etcetera. Although he was no longer involved in technical work, all technical reports of the lab had to be co-released by him, and he carefully screened them all for consistency and correct use of the Dutch language. Piet had a - to modern standards - huge office in the management floor above the main entrance of the lab. To come there one had to walk through a dark corridor with concrete pillars and wood on the floor. As a kid I would go to meet him at the end of the day, being told by the guardian at the gate that I was allowed to go up to his office. I would find him there sitting at his desk as on the picture, and I was allowed to read through the large pile of technical reports on his other table. After that we would make a walk through the lab, visiting some of his friends and colleagues, showing me equipment in the labs. No wonder I choose to study electronics too!  He would play this role until his retirement in 1980, after a career of 42 years with the PTT and nine years before it would become KPN. The Neher-laboratorium where he worked 25 years was closed by KPN in 2001, to the regret of Piet and many others, and today houses apartments.

To my regret I started diving into the technical history of my father after he had passed away. Of course we had talked about some elements of his work, and when I was young I regularly visited him at the end of his day in the DNL, but we never discussed technical things in the detail I would have liked, in hindsight. Fortunately, however, Piet was a very structured man, who kept everything he deemed interesting. And so I have a pile of reports he had written, which are the basis of the story told above. Similarly I have a pile of books and leaflets related to the PTT and Philips. All this forms the basis of this story, supplemented by my own memories and data found on the internet.
Reports Articles Books